So, yeah, I know  Im a little late to the party. 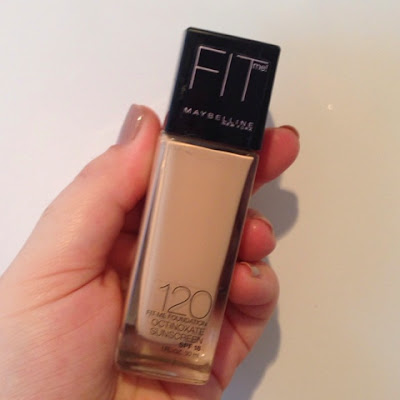 This is the first “drugstore” foundation that I have bought since.. well… maybe a decade. Those of you who regularly read this blog will know that I had found  my “Holy Grail” foundation years ago.  But it the spirit of trying new things ( I do it all for you ) I headed into Priceline the other day to see what as on offer (and on sale) I was a little apprehensive about changing my foundation routine after my lack of success with the pricey Nars sheer glow trial (Im going to try and get through it eventually)

I had seen people referring to themselves in “fit me” shades all over YouTube and instagram was and aware that the fit me sticks had just been released and so I went straight for the Maybelline display. After a bit of playing around I finally decided on the shade 120 after others looked either too pale or too orange on me.  While I was there I checked out the fit me sticks and after some swatching I decided that they weren’t for me.

Ive worn the Maybelline fit me liquid foundation every day now since purchasing it and have to say that I am so impressed! The coverage is great, not too heavy, and the finish is quite natural looking and dewey.  This is probably the first foundation I have tried that actually looks better by using your fingers rather than the amazing Beauty Blender which I found surprising.
There was little to no “sticking” to dry spots, folds and blemishes that I have found with other foundations so this automatically was a win.
After a couple of hours I found that the makeup was still in place and looked good, it hadn’t been broken down by the oil on my face. I  did however feel like i required a touch up of powder during the day as my face felt like it was greasy  but when I checked the mirror my face wasn’t showing any signs of excess shine. Throughout the day when I  touched my face it felt like I had just applied moisturiser, hence my concern about powdering. It seems that Im not used to a foundation feeling so moisturising on my skin!
At the end of the day the makeup still looked great and looked even more dewey, if I reapplied powder then it would have looked good as new even after 10 hours of wear.
I’m astounded at how such an affordable and readily available foundation can out perform something as hyped and raved on about foundation as the Nars sheer glow. This foundation not only sat on my skin better but it lasted longer and looked fresher at the end of the day. While the sheer glow was all but melted away by the end of the day the Maybelline Fit Me looked almost as good as when I applied it in the morning

It seems that I really have been missing out on some good bargains and great products by sticking to high end brands.

I love this bad boy. I often get asked what foundation I use when wearing this. Such a delightful drugstore find!

Im so impressed with it!

the fit me liquid foundations are really good, i tested it out for a whole day and it was just so lovely on the skin, the application is really good...too bad i got the wrong colour but i'm still going to go back and get the right shade, but the formula is fantastic!